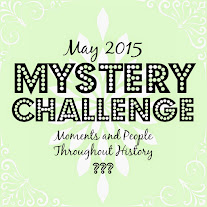 So recently, I am looking for a challenge... gasp! And I ended up finding myself as a member of the May Mystery Challenge.  So we were randomly paired and each person was "gifted" with a topic.  I was assigned 1964 New York's Fair by Jonie from KnotSewNormal.  Huh? I had never even heard of that?!? Admittedly, at first, I hung my head in sorrow and played the envy game with everyone else's topic.  Then I sucked it up and googled my subject.  I found out a ton of information and an overload of cool trivia.  For instance, below is a postcard from the fair.  Do you recognize that gigantic globe? 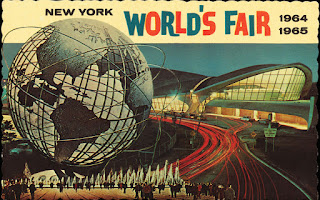 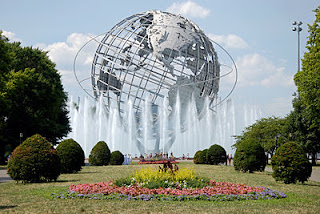 It is called the Unisphere.  It was the symbol of the 1964 World's Fair and symbolized the theme which was "Man's Achievements on a Shrinking Globe in an Expanding Universe".  It still stands today! 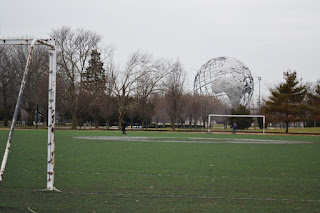 Does it look familiar now?  You have probably seen it in numerous movies, music videos and even video games since it's original construction including Men In Black, Cyndi Lauper's Girls Just Wanna Have Fun, B52s album cover, King of Queens, Iron Man 2, Captain America and a version entitled the "Monoglobe" appears in Grand Theft Auto IV.

The hosting of a World's Fair results in the construction of an entire mini-city within a city. I live near Seattle which boasts it's skyline altering Space Needle which was constructed for the 1962 World's Fair. (See Jonie, you should have picked that one :) ) There are plenty of notable fair landmarks and structures left in New York and there is an amazing article here that discusses them.

Now, what did I sew?  I really had no clue what to do with this one.  I am so used to sewing for my daughter that I really searched for a way to make her look like a typical member of the 60's crowd.  And then the lightbulb went off! What about making a dress for myself???

I chose the Simplicity 1155 pattern which has two vintage looks.  The first thing I discovered is my renewed sense of hate for paper patterns.  I sneezed and ripped a piece! Argh!  But the results were worth the pain.  Not only did I end up with a dress for myself, but I managed to watch like 20 seasons of my shows on Netflix.  Slow and steady wins the race right?
﻿ 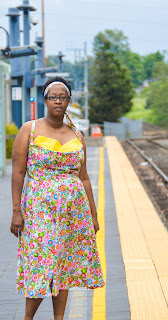 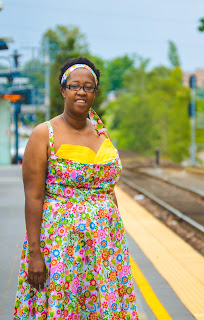 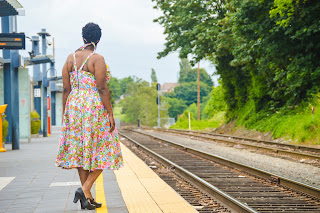 I have to say that the time part wasn't as bad as I originally thought it would be and perhaps I am used to the instant gratification of whipping up a dress for my daughter in under a day and never having to adjust anything?  I still have a lot to learn about adjusting dresses to flatter my shape but not bad for a first try.  Either way, I think I have found my inner girlie girl and I have no doubt that I should make myself another dress soon.

Thank you so much for stopping by for a little history and to glance at my photos.  Please continue to follow this amazing series and glance backwards if you missed any of the previous creations!